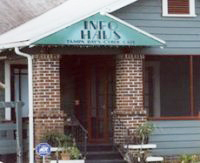 InfoHaus was literally the only place anywhere in Tampa to get online in 1995!

Paul Kunz, Co-inventor of the web,
with Dewey Davis-Thompson in 1996

THE HISTORY OF WEB SITE DESIGN IN TAMPA BAY

Long before the railroads, mechanical calculators crunched numbers with gears, but electronic computer programs sparked up in 1944 with the famous “ENIAC.” A year later, in 1945, the first computer bug was unleashed! Created in the 1960s, the first “internet” was used by Universities and military scientists to share arcanums, and by the late 1980s, when Internet Adept founder Dewey Davis-Thompson was at New College, the Florida Honors College in Tampa Bay, the internet had become a regular part of daily life for students.

In 1990 there was still no “world wide web,” no such thing as web pages … just text messages, email attachments and file transfers. Chat rooms were run by connecting two dozen phone lines to a computer in somebody’s garage. Such “BBS” networks like SunRay were very local in nature. Meanwhile the beginnings of national and international connectivity were seen with text-only CompuServ and AOL.

Then, in 1991, HTML and the internet were finally married by Sir Tim Berners-Lee and Paul Kunz (among others) to make the first web pages. Documents could be stored on one computer and viewed on another, just a click away! Still, for another five years it remained mostly a tool for universities and laboratories.

Web design for dot com was brand new in 1995, and our Tampa Bay web site design, hosting and search engine placement team was the first website design company in Tampa. Internet Adept, Inc. began as an offshoot of Dewey’s company Computer Tutors of Tampa, established in 1991 to teach people how to use emerging technologies.

As the Technology Beat writer for the Weekly Planet, a columnist for Computer Friendly News and a reporter for the Tampa Tribune, St. Petersburg Times, WMNF and WUSF Davis-Thompson saw the first stirrings of interest in web sites and web site design in Tampa Bay, Florida. Among the first web site junkies were his friends at Info Haus Cyber Cafe, on Armenia in Tampa, Florida, where Davis-Thompson gave “Surfing Lessons” every Tuesday night for newbies.

Ausec and Cheney, a local advertising firm working in broadcast and print media, had a small web site sales team that hired with Dewey Davis-Thompson to design web sites for their clients including Princess Diana Gown Auctions, The Tampa Visitor and Convention Center, Maher Chevrolet and the City of Tampa.

In 1996 Davis-Thompson wrote a grant proposal, and with $10,000 and a lot a midnight oil helped to make WMNF the first radio station to broacast from a Tampa Web Site, with original graphics by Clay Bennett, a Pulitzer Prize winning cartoonist from St. Petersburg, Florida.

In the decades since then, the web site design community in Tampa Bay has grown, as has the client list for Internet Adept. Says Davis-Thompson “I believe it is our excellent service and commitment to honesty, fair prices and customer satisfaction that have helped us to keep our business strong – even weathering the dot com bubble when other companies learned the truth: success takes lots of hard work!

“It has been our pleasure to provide web site design, search engine optimization and hosting services on projects like the Tampa Theatre web site, the Tampa Housing Authority web site, the Tampa Bay Business Guild web site and the Tampa Bay Workforce Alliance web site as well as projects for WMNF, American Stage, St. Petersburg Opera, Mayor Kriseman, Great Explorations Children’s Museum, and hundreds of other projects. I have been interviewed as an expert in Search Engine Optimization by The Tampa Bay Times and The Tampa Bay Business Journal has written about my work which includes consulting for the United Way, Raymond James, The Sustany Foundation, and numerous marketing agencies.”

We had the chance to meet one of the true fathers of the world wide web, Paul Kunz, during his holiday visit to Florida. He spoke to us about the innate strength of open source code and protocols and why they will keep the internet strong and free. He also politely laughed at Dewey’s joke about particle physics…

About Mr. Kunz, C-Net writes, “The commonly held image of the American Web pioneer is that of a twenty-something, bespectacled computer geek hunched over his Unix box in the wee hours of the morning, surrounded by the detritus of heavily caffeinated drinks and junk food while deep in pursuit of worldwide information domination and IPO riches.

“This country’s actual Web pioneer, by contrast, had smaller things on his mind when he launched the first Web server and Web page on U.S. soil. Much smaller, in fact: electrons.

“It was at the Stanford Linear Accelerator Center (SLAC) that particle physicist Paul Kunz wrote and posted the first American Web page.”

Did you know?
The Info Haus was Tampa’s first cyber-cafe. Back in 1996 it was one of the only places to get an internet connection in all of Tampa Bay!

1945 Vannevar Bush writes an article in Atlantic Monthly about a photo-electrical-mechanical device called a Memex, for memory extension, which could make and follow links between documents on microfiche.
1944 with the famous “ENIAC.” A year later, in 1945, the first computer bug was unleashed! By 1948 the first commercial computer was available with the much friendlier name “UNIVAC.” The mouse and html emerged in the 1960s, believe it or not, around the same time of the first networks, which were conjured up by the Advanced Research Projects Administration, called ARPANET.
1960s Doug Engelbart prototypes an “oNLine System” (NLS) which does hypertext browsing editing, email, and so on. He invents the mouse for this purpose. Andy van Dam and others build the Hypertext Editing System and FRESS in 1967. ARPAnet, the precursor to today’s Internet, is commissioned by the Defense Department in 1969.

1980s Widespread development of LANS, PCs and workstations in the 1980s allowed the nascent Internet to flourish. Email, CompuServe and other proto-webs emerge from academic settings.